The fourth edition of the Indian Women’s League (IWL) rolled into town towards the end of January. In yet another blink-and-you-miss-it appearance, it will wind up its affairs by Valentine’s Day. A twenty-four team league may have been promised by the All India Football Federation (AIFF) in August but twelve it remained (the same as last year) and these outfits have been slugging it out for the last three weeks at the Bengaluru Football Stadium.

The fixture between pre-tournament favourites, Sethu FC and KRYPHSA FC caught my eye in the schedule and I took in that game at the stadium a few days into the competition. It was a well-contested affair but KRYPHSA’s class showed in the end and they won 2-0. If ever there was an advertisement for women’s football in this country, this was it, but very few people watched any of it in person. I knew that would be the case the minute I found more than ample space for my car in the stadium’s cramped parking lot.

There were large banners announcing the tournament and its schedule to passersby outside the gates but they kept walking, showing more interest in the mall and pubs just down the road. Entry was free but the hundred-odd people in the stands comprised mostly of players and staff from other teams. Our women footballers only have each other, and it showed. 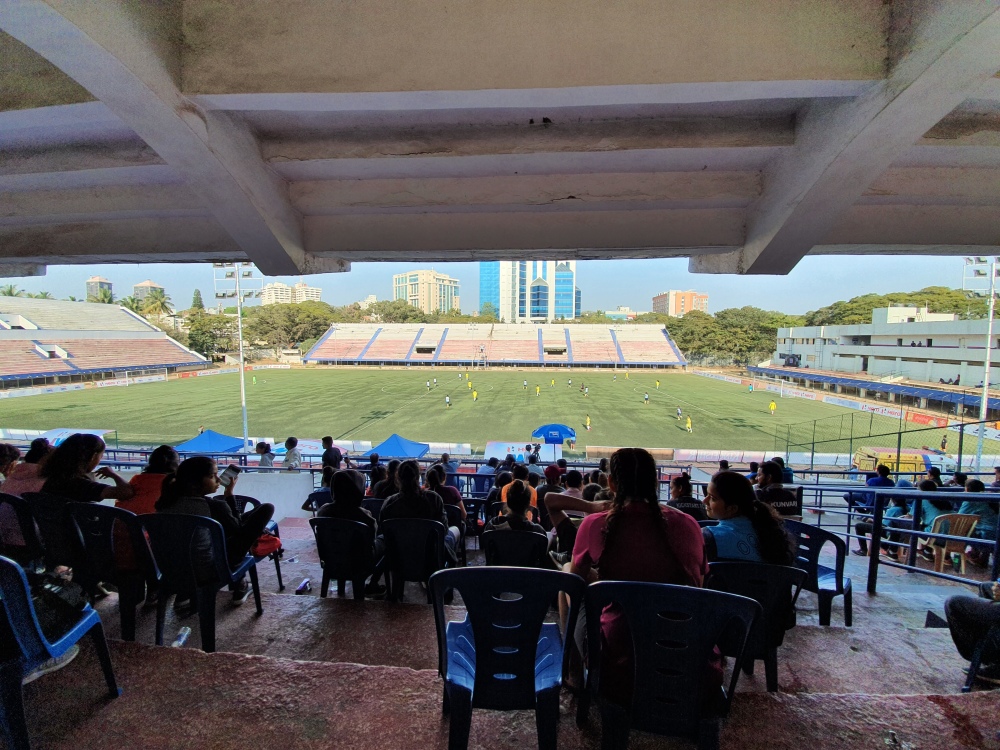 With such little interest, it is not surprising that progress has been glacial. The AIFF is an easy target but they have introduced measures to grow the women’s game. Thousands of girls have been introduced to the sport through Golden Baby Leagues and the federation has worked with the sports ministry to find talented players for the FIFA U-17 Women’s World Cup which India will host later this year. Young girls have been on exposure tours and for a change, the senior national team had a packed schedule in 2019. Activity picks up only around competitive tournaments and the U-15 and U-19 squads have been slightly neglected in this cycle but that is an age-old problem that besets all aspects of our country’s sporting eco-system.

There are other issues too, with the scheduling havoc wreaked on Sethu FC this year another example of organisational ineptitude. Societal apathy though, is still the biggest impediment to progress. More women are playing the game today than anytime before with AIFF’s efforts and those of NGOs and private organizations bearing fruit, but the game is still very much on the fringes.

The barriers to entry for a young girl wishing to pick up a ball and start playing are huge in this country. A lot of players plying their trade in the IWL have spoken about the challenges they faced as kids; whether convincing family to let them play or finding others to play with once that hurdle had been crossed. With road-blocks at every step, is it any wonder that a lot of players get disillusioned and exit the system? When an established India international like Dalima Chhibber says that she cannot see a future in football, where is the incentive for those lower down the pyramid to stay invested?

Unfortunately, and the travails of men’s football in this country bear testament to this as well, only visible success will accelerate the development of the sport and its stakeholders. After agonisingly missing out on a spot in the third round of Olympic Games qualification, hopes are now pinned on the U-17 team. A good showing on home soil in November could be just the boost the game requires in India. Qualification for the 2022 Women’s Asian Cup would help as well. It has been almost two decades since we made an appearance in that tournament. The AIFF has bid to host that edition as well and a back-door entry remains a possibility.

In the meantime, the game will meander along, more in hope than any real conviction. In 2003, when the FIFA Rankings were first instituted for women, India placed 56th in the maiden list. We are now ranked 57th and have hovered around that mark almost every year in between. New ideas are required or we could be sat here having the same discussion a couple of decades from now. Today, UEFA announced a new project in partnership with Disney. The Playmakers Scheme will use Disney characters to attract girls in Europe to the sport. The solutions may lie outside the box and we will do well to explore similar and culturally relevant options.

Onto the showpiece final tomorrow between KRYPHSA and Gokulam Kerala then. Scheduled to kickoff at 2:00 pm on Friday. If that doesn’t tell you that the organisers do not anticipate crowds, nothing will. This is no country for women footballers. Yet.

One thought on “No Country For Women Footballers”

For the love of Indian football. View all posts by flyinggoalie